Welcome to the largest community driven website dedicated to the real time strategy Original War. If this is your first time interacting with the online community here or even with the game itself, take a few minutes to read the below summary of what Original War is and everything the Original War community currently offers.

What Original War is... 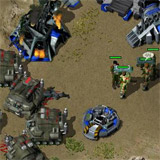 If you like the RPG and RTS game genres, then you must have at least heard of a game called Original War at some point. It was first released in 2001, quickly earning awards and praise from reviewers worldwide.

Original War awed players with its compelling campaign story and innovative, never before seen gameplay style. You can learn more about the gameplay by reading some of the below articles:

The campaign however was not everything. There is only so much you can do in single player, and players quickly craved for something more. Thus, they soon started trying...

At first there was Gamespy Arcade, and the players saw that it was good. But all good things have to eventually make way for better things. The arrival of Original War Support and the unofficial community patches changed everything. It brought many new possibilities, such as:

All patches since 1.02 were coded and released by the Original War Support team, however none of them would be possible without community feedback and beta-testing. It is up to the community to help develop Original War by submitting bug reports, asking for new features and creating new mods and ideas.

You can help us by giving your input:

Our community is vibrant and growing, and new content is constantly released. Become part of the community to share in the experience and leave your own mark on the development of Original War.