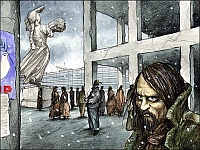 Original War history
Let's start from the beginning, so how did it start?

In 1908 Tunguska meteor hit the Earth and destroyed most of Sibierian forest. It is still a mystery what exactly Tunguska meteor was and how it looked, because neither army nor scientists found any evidence in form of pieces or whatever that might have been related to this meteor and prove its existence. It is said that it was a huge piece of ice that melted while entering the Earth's atmosphere and that all the tress around the area were acutally struck by wind that was generated by the meteor's size and speed.

The plot starts just after the WWI ended (WWI: 28 JUL, 1914-11 NOV, 1918), when allegedly during a scientific expedition to Siberia, an American colonel - Emerson** finds a mysterious machine (later called EON). It is an additional piece of the story made up by authors of the game to make it more interesting, however an expedition like this might have taken a place in real life, because back then, Siberia wasn't controlled by communists. It is when Allies started to fight against October Revolution (which is also mentioned later in game). The goal of that expedition was to find out what actually happened and to examine the whole area destroyed by Tunguska meteor, which also in real life hit the middle of Siberia on 30 JUN, 1918. The whole trip took place before Leonid Kulikov's soviet expedition (in 1927), that also tried to find out more about Tunguska catastrophe. The fact that it is still unknown what exactly happened there gave the authors possibility of making up some stuff and creating Russian campaign. It starts just after the cold war ended (CW: 1941-1989/91), when (and this was made up by the authors) Russians stand that Americans won the cold war, because they had stolen their siberite long time ago, before discovery.

During campaign, there are two different timelines mentioned in the game (caused by Americans that travelled back in time before Russians to steal their siberite and move it from Siberia to Alaska - and that forced Russians to travel back in time too and get their siberite back) but despite of that there are still some real, historical events that took place in both timelines (some of them are mentioned in 5th American mission). For example Jet Propulsion Laboratory - a NASA research center in Pasadena (est. in 1936) - where, according to Original War's storyline, an American scientist, Hugh Stevens** worked or the fall of the Berlin Wall (9 NOV, 1989) - mentioned by a Russian scientist in 5th American mission.

Let's talk now more about military heroes/characters that are mentioned in game. One of them is Lenin who is mentioned a couple of times and whose name is used as a name for one of the Russian bases. His real name was Vladimir Ilyich Ulyanov -(22 APR 1870-21 FEB 1924). He was the first leader of SSSR, creator of Russian communism (later transformed to bolshevism and leninism). Leninism, alike communism, based also on marxism, which was a different version of socialism presented by Karl Marx (5 MAY 1818-14 MAR 1883), who is also mentioned in game a few times. Later, Leon Davidov Trotsky (7 NOV 1879-21 AUG 1940) creates his own interpretation of leninism, called trotskyism and alike his opponent, his name is also used as a name for one of the bases.
Besides them, some of the first Soviet marshals were also honored to have their names used in game as names for Russian bases:
Mikhail Nikolayevich Tukhachevsky (16 FEB 1893-11 JUN 1937) - one of the first sentenced and murdered Soviet commanders during Stalin's great purge, which murdered many Soviet officers and commanders;
Vasili Konstantinovich Blücher (1 DEC 1889-9 NOV 1938) - died during Stalin's great purge because of injuries he got during brutal examination by Soviets. He was accused to be a part of conspiracy after a fight against Japanese near Chasan lake;
Lavrenty Pavlovich Beria (2 MAR 1899-23 DEC 1953) - after Stalin's death he was found to be one of the biggest criminals, co-responsible for Stalin's great purge. Many historians think that he was the alleged killer of Stalin;
Aleksandr Iljicz Jegorow (22 OCT 1883-23 FEB 1939) - one of the last vicitims of Stalin's great purge, he was arrested and eventually killed;

Also Antonov-Ovseenko (21 MAR 1883-10 FEB 1938) - a diplomat, creator of communism movement in Finland, Moscow and Petersbourg. One of the leaders of uprising in Piotrograd. He was killed becase of working with trotskyists;
Sergei Kirov Mironowicz (27 MAR 1886-1 DEC 1934) - a very popular and respected by his comrades bolshevik activist. It is said that it was a Stalin's order to kill him, because he became a threat to Stalin's position in army. His death is also known as the beginning of Stalin's great purge;
Lazar Kaganovich Mojsiejewicz (22 NOV 1893-25 JUL 1991) one of the closest co-workers of Stalin and a member of the the party's highest management. He was usualy one of the main executors during Stalin's great purge;
Emanuiłowicz Yakir (3 MAR 1896-11 JUN 1937) - an army man, one of the biggest reformators after the war. He was sentenced and killed together with marshal Tukhachevsky;
Nikiticz Riutin (13 FEB 1890-10 JAN 1937) - leader of an anti-Stalin organization. He was arrested in 1932 and sentenced to death, however he avoided the death penalty because of S. Kirov's intercessoin. He was then sentenced and put to prison for 10 years, however he died in 1937 due to beating that occured during his examination by Soviet soldiers, because he didn't want to admit that he was guilty;

Stalin's great purge began in 1934 after the death of S.M. Kirov. Most of the people mentioned above were sentenced and murdered during the great purge - during that time many people were killed, inlcuding commanders of Red Army and party members that were accused of betraying Red Army, not doing what they were supposed to do, betraying their homeland and harming their country. It ended in 1939 and one of the last murdered person was A.I Jegorow (mentioned above).
During the great terror, a solider Maxim Gorky was poisoned (or killed) to death. His real name was Alexei Maksimowicz Pieszkow (28 MAR 1868-14 JUN 1936) - at the beginning, he was a close friend of Lenin and author of many anti-bolshevik articles. After he came back from emigration, his work was considered as social realism and he was chosen to be the leader of SSSR' Writers Union. Probably his name was used to create the main Russian character by authors of Original War (Yuri Ivanovich Gorky, also known as Burlak).

Opposite to ideologies mentioned above is capitalism - based on rights to privacy and freedom of speech is totally different from socialism that is based mainly on common help and does not give the right to posses private things.

Let's talk now about the missions. There are many things in the storyline related to real history... but 12th Russian mission is the one that talks about some really interesting stuff. One of the commanders asks questions about marxism - they are based on the book called "Das Kapital: Kritik der politischen Ökonomie" ("Capital" in English translation). He also asks about Lenin (his middle name) and events that really took place (October Revolution and Program Declaration of the Communists).

Now... let's talk a little about vehicles in Original War. In that time, Americans used mainly light/medium vehicles that enabled them to move faster. Disadvantage of this was that because of their low defense, they were an easy target for Russians. And back in that time, Russians were creating really massive and large tanks, focusing mainly on defense and attack rate. This situation is reflected in the game as well. If you look at American or Russian vehicles you will see that they look very simillar to actual American/Russian tanks.
For example, you can compare the Russian tanks' chassis from Original War to the chassis of actual IS-3 tank, which shares also many other treats with Russian tanks in game.
American vehicles with medium chassis from Original War are simillar to actual American tanks - M1 and M2.

There are many things that don't exist in real world but were created just for Original War, so it's not just another history game but an interesting and innovative strategy.

One of them is EON (a time travel machine) - idea probably taken from "Star Gate". An alien civilization sends on Earth a strange device that bends fabric of space and time and allows to travel back in time (something like this was also used in "Star Gate").
Even though, the idea of travelling in time seems to be really difficult to achieve - many people all over the world are experimenting and trying to build a machine that will make it possible. Besides, don't we have people who believe in UFOs or extra-terrestial civilizations living somewhere in space? But, you don't think we're the only living thing in the universe, do you?

Double laser... It's something new but it's actually based on real thing. Double laser consists of two green lasers (they are used in medicine as well) placed in opposite directions. They have built-in computers that target to a specified place and set the best angles for lasers, so they can shoot a string of light in the same time. The creator of double lasers for Original War is Vladimír Chvátil, also known as Vlaada.

Some day someone said that Original War shouldn't have real cargo bays and tanks becase the game isn't realistic itself. But should we call a game, that talks about real people and characters and with storyline simillar to the real history, unrealistic?

Historical knowledge isn't a forbidden knowledge (or difficult to posses), so this article wasn't created to educate about history but rather to show real facts that happened and that everyone know about but which are usually forgotten. It also shows the educational aspects of the game. For those who want to learn more about history and events that really took place, I suggest to look for them in your history books.

** people marked like this are not real and were made just for the game's purposes.