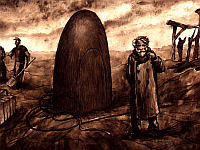 EON is a device made by alien civilization. It was discovered in 1919 AD, in the heart of Siberia, region of Tunguska explosion, during World War I. Unofficially it is said that EON was the cause of this still unexplained explosion which managed to lay all trees in range of 40km. It was discovered by American soldier - colonel Emmerson. Machine was transported to a top secret research center where it was hidden and examined.

American scientists concluded that it is a real time machine powered by unknown crystals. Using it they could erase all bad things that happened in the past and give the world a completely new beginning. Unfortunately most of the fuel had been spent on tests (years 1920-1925). A few crystals were left, allowing only one travel. It was time-space shifting machine which could move different objects back in time for exactly 2 million years with accuracy of 4-5 years. Traveling object would be put in some random place within 15 miles from machine's location.

Siberite is a high-energy mineral emitting a huge amount of heat. At the very beginning of tests it was considered to be radioactive. However no scientist could confirm this hypothesis. During one of the tests a small piece of siberite crystal was submerged in water and led to water boiling in a few seconds. Scientists working on the mineral were witnesses of chemical fusion transforming atoms of hydrogen into helium and emitting a lot of energy. A small amount of this mineral would suffice to provide electricity in all places on the Earth.

In 2004 government of USA decided to use this last travel to send US soldiers to the past. The main objective was to capture main siberite deposits and transport it to the current USA territory which was connected by land with Siberia in that time. Americans were extremely surprised to see Russians in the past with better equipment and technology than they could imagine.

These Russians travelled back in time a few years after Americans, after discovery of strange minerals on Alaska - that mineral was named alaskite. Russians were surprised to discover that this device was created by Americans. And the most odd is a fact that they lived when Alaska was reachable from Siberia by land - 2 million years back in the past. Russian government, taking control of EON (Russians call it TAWAR), sent a contingent of soldiers to defend deposits of alaskite and providing Russia with this powerful mineral bringing American theft to naught.

First American who landed in the past was Tim Gladstone. Being in an unfriendly place he met there primogenitors of mankind: Homo erectus pekinensis, colloquially called apemen. Thanks to this he got to know their primitive language and behavior.
First person of Russian forces to appear in the past was general Morozov. He got there on 1st October, year before main character of Russian campaign - Y. I. Gorki.

Unfortunately traveling with EON is available only in one direction. It is unknown if our heroes can come back to the future. Travel back in time was a great sacrifice on their part, most of them weren't associated with the world too much or followed blindly all given orders. The plot leaves this aspect for player's imagination...